The top teams in the tournament were all able to win their quarterfinals, although there were some tense moments for both the Americans over the Swiss and the Canadians over the Czechs.  Even though these were the two teams who had the most difficulty in their quarterfinal match ups they are still both favourites heading into the semi’s against the Russians and Swedes respectively.

I will be using the odds from our top rated sportsbook, SportsInteraction.com when breaking down my picks for both of these games.

The Americans did only squeak by the Swiss 3-2 in the quarters, but they are still the team that has impressed me most to this point in the tournament.  They went 4-0 in the group stage, which included a 3-1 win over the tournament favourite Canadians, and also were able to outplay the Russians en route to a 3-2 win under a week ago.

I see the Americans controlling play in this one, with their small, skilled forwards taking the game to the Russians and forcing Russia to chase them around the ice.  As long as the Americans can limit the counter attack of the Russians, I do think they win this game in regulation the majority of the time. 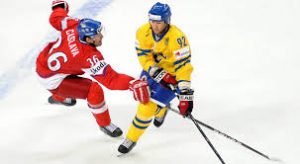 Nylander leads the tournament in scoring with 11 points in 5 games.

The Canadians are the best team on paper in this tournament, but most would argue that the Swedes and Americans are very close behind.  Sweden, for instance, has a full lineup of their best U20 players with none being forced to miss the tournament due to playing in the NHL, which represents a big loss for the Canadians.

I really haven’t been impressed with Canada’s game in the defensive end this tournament, as is evidenced by both goaltenders currently having a below .900 save percentage which is simply not good on a team that should be forcing opponents to launch shots from anywhere as they are being outplayed.

The Swedes are right there with Canada in terms of top end skill up front and I’m simply not confident that Canada will be able to shut down Alexander Nylander or Joel Eriksson-Ek, a couple of top round draft picks who have professional experience in North America this season.

The loss of Phillipe Myers has affected this team at the back end and I don’t think asking Thomas Chabot to play near 30 minutes a night is the most effective thing to do moving forward.

Sweden has been the better team to this point in these Championships and I don’t think there is any reason to have Canada as the favourite in this game at this time.  Yes, Canada could put it all together for this game against the Swedes because they do have the talent to beat anyone in this tournament, but I think the smart money has to be on the Swedes to get the win here.

For all of your World Junior news be sure to check out TSN and if you’re looking for more information on how to place these bets on the World Juniors, click here for a step by step guide.