Home » Top Sports To Bet On In Canada » UFC Betting

Canadians love their MMA.  Georges St. Pierre is a household name throughout Canada and of course the UFC have other massive stars such as Conor McGregor who have become stars worldwide.  The Rogers Centre was recently passed for the largest attendance record in a UFC event, but the fact they held that title for so long shows how big UFC is in Canada.

The UFC has become somewhat of a monopoly for MMA throughout the world, after purchasing the WEC, Strikeforce and Pride.  This is great for the sport and UFC bettors because it puts all of the best fighters in the world on the same roster and allows for competitive fights on every card.

Canadians should bet on the UFC online through a reputable betting site like the three I’ve listed below.  None of the government run sports lotteries offer MMA betting.

Each of these sites will take bets on at least the main card from every UFC event.  I expect UFC betting to continue to grow in popularity and for these Canadian sportsbooks to continue to improve their UFC bet offerings in order to keep up with the demand from Canadians who love MMA.

Israel Adesanya is putting his middleweight belt on the line vs Yoel Romero in Las Vegas for UFC 248 this Saturday. The women’s strawweight title fight is also on the ....

Jon Jones continues to be active, getting back into the octagon to defend his light heavyweight title for the fourth time in 15 months this Saturday. He will face Dominick ....

There are more options than you may think when it comes to betting on a UFC fight.  The most obvious and popular betting option is simply wagering on which fighter will win.  After that there are a several other betting options including total rounds (over/under), method of victory (how the fight ends) and round betting (betting on a fighter to win in a specific round).  Below I’ll look at a few of these betting options using example screenshots from SIA and Bodog

This is the most basic and popular form of UFC betting.  You simply wager on which fighter you think will win the fight.  The fighter can win via knockout, submission, DQ, or decision.  The only thing that matters is that he has his arm raised at the end of the fight.

Here is an example using the odds from the main event of UFC 225 between Robert Whittaker and Yoel Romero.

This is also a great example of why it is advantageous to have accounts with each of the 3 recommended Canadian sportsbooks.  You can see that the odds here are quite a bit different between Sports Interaction and Bodog.

But if you think Romero is going to pull off the upset then you should bet at Bodog because you get odds of 2.90 on Romero at Bodog, instead of 2.70 from Sports Interaction.  This is the difference between a $290 payout on a $100 bet and a $270 payout.

This is another common bet, which involves wagering on how long the fight will last.  The sportsbook will provide a total and you can bet on whether the fight will last over or under that number of rounds.  Here’s an example from the Romero vs Whittaker fight:

Getting a little bit more technical you can also bet on when either fighter will win the fight. 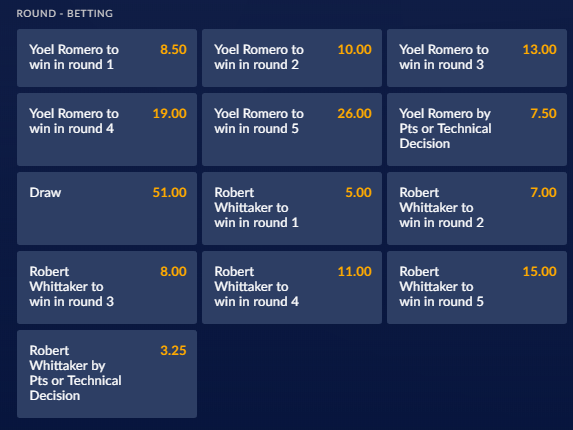 As you can see you can bet on either fighter to finish the fight in any round or to win via decision.  According to these odds Whittaker has a great shot at winning the fight in the early rounds, or by decision.

The fourth betting option is how the fight will end.  There are three ways for either fighter to win: knockout, submission or decision.

Method of victory betting can be great for bettors who understand the fighters strengths and weakness, as well as the likely game plan for each fighter.  If you know all of this information you can get a fairly good idea of how the fight will play out and can bet accordingly.  If you think Whittaker has a great shot at the knockout, then the 2.50 knockout odds look much better than the 1.43 odds for Whittaker to win the fight from the same betting site.