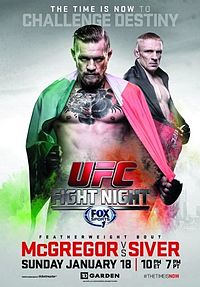 The Notorious Conor McGregor is back in the Octagon this Sunday in Boston.  This time, his challenger is the German Dennis Siver, who is currently ranked #10 in the Featherweight Division.  The odds on this fight are just ridiculous with many people expecting McGregor to easily knock out Siver as an easy stepping stone on his way to a title fight with Jose Aldo.  A McGregor first round win even pays out less than even money!  That means that the oddsmakers think there is a less than 50% chance that Siver even gets out of the first round in this 5 round tilt.  McGregor always puts on a good show and I’m excited about this fight.

The other main fight on the card is Donald Cerrone (#3) vs Benson Henderson (#5) in the Lightweight Division.  Benson was supposed to fight Eddie Alvarez in this one, but an illness to Alvarez has forced Cerrone to step in on short notice.  Just how short?  Well you might remember Cerrone dominating Myles Jury just two weeks ago at UFC 182.  That’s right, Cerrone is now taking fights 2 weeks apart.  It’s a boss move, but after 6 wins in the last 14 months and a steady climb up the leaderboard many MMA fans think it was a poor decision by Cowboy to fight so soon against a fighter who has beat him twice and has a style that is difficult for his kick boxing.

Here’s what I’m laying down on each fight.

I’m one of the guys that believes McGregor is the real thing.  He’s already won 4 straight fights in the UFC; he made the win over Poirer (#6 ranked) look easy; he beat Max Holloway (who has looked awesome since his loss to Conor) with a torn ACL and his unorthodox style makes it look like he’s near invincible.

That said, the hype train may have gotten too crazy…..at least with respect to the odds on this fight.  Of our recommended sportsbooks, Sports Interaction has the best odds on McGregor with odds of just 1.10 to win the fight.  Bet365 is offering the best odds on Siver at 8.00.

I think Conor is going to win, but at 1/10 odds I’m not going to bet him.  So I looked a little deeper and found some prop bets that I like.

I’m just taking McGregor not to win in round 1.  I think Siver has the ability to at least prolong the fight with attempts at wrestling and his movement.  Since it’s a 5 round fight I also expect Siver to play it very safe for the first round to try to figure out the strange style of McGregor.  It’s just ridiculous that McGregor has odds of 1.70 to win in round 1.

That’s my lone play on this fight.

I like Donald Cerrone and have been very impressed with him in his fights over the past year, but I just don’t see his style matching up well against Smooth.  Henderson has two wins over Cowboy from back in their WEC days and the fast paced fighting style of always staying on his opponent will work well against Cerrone’s kick boxing.  Cerrone’s biggest weapon is his leg kicks, as you saw in his fights against both Myles Jury and Eddie Alvarez.  If Benson keeps pushing the pace it makes it very difficult for Donald to land those kicks.

I’m taking Henderson straight up in this one.  In the two fights with Cerrone before he submitted him once and one went 5 rounds to a decision.  I see this one going to a decision, but I think the chances of a Benson finish are there, so I’ll stay safe and just bet the fight straight up.