The semi-final games in the World Juniors were filled with drama and have really given this tournament a lot of buzz heading into tonight’s finals.  The Americans beat the Russians in a shootout, with Troy Terry going 3 for 3 in the shootout to push the Americans from the brink of elimination (they were behind after 3 shooters) into the finals.  In the Canadian game, Team Canada was behind early after the Swedes scored 2 goals on 3 shots to chase Connor Ingram from the crease, but the team stayed composed and Carter Hart shut the door from then on as Team Canada outclassed the Swedes down the stretch to win the game decisively.

It’s now the great rivalry of Team Canada vs Team USA in the finals with plenty of questions to be answered.  I will be using the odds from our top rated sportsbook, SportsInteraction.com for this game. 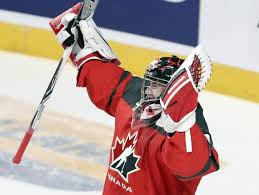 Canada will need a big game out of Carter Hart tonight.

As you can see Canada is the significant favourite heading into this game even though Team USA beat Canada 3-1 in their round robin meeting.  That said, Canada really seemed to turn the page last game, putting the pressure on the Swedes and a similar game plan should provide them with a great chance against the small skilled team the Americans have iced this year.

I also like the switch back to Carter Hart in net heading into the finals as well.  It’s very rare for a goaltender to lost his starting job after going 2-0 to start the tourney, but that’s what happened to Carter Hart.  He was the expected starter to begin the tournament and I think swapping him out based on a 6 save shutout by Ingram against the Slovaks was somewhat premature.  I do think Hart is the better goaltender for this situation as he plays in front of a very quality team in Everton, which allows him to have a great deal of experience playing for a team expected to win.

Thomas Chabot has been an absolute stud from the back end for Canada, sometimes looking like a man among boys.  He will need another big game for Canada to contain the skilled players of the Americans and I do expect him to play well because his confidence is at an all-time high at the moment.

If Team Canada plays like they did against Sweden, applies the pressure down low and really makes it difficult for the shifty skilled players of the Americans to find room then I do think they should win this game and avenge the round robin loss.

I do think Canada is going to win in regulation, but the bump in return simply isn’t enough to risk losing the bet if Canada pulls off the W in OT or a shootout.  I’ll be taking the money line for Canada to win the gold.

The game gets underway this evening at 7:30pm on TSN.  Don’t miss it.