The tournament is a day in, but there are still plenty of first round matches in the works today and all of the favourites are still in the draw.  We don’t have Roger Federer at the tournament, but Djokovic, Murray, Nadal, Wawrinka, and of course our countries great hope, Milos Raonic, are all in the draw.

I have tickets to today’s 6:30pm session on Centre Court.  It was supposed to be Raonic vs Karlovic, followed by Murray vs Robredo, both of which I was very excited about.  Unfortunately it looks like it’s going to be raining all day, so which matches (if any) will be played during the session is anyone’s guess.  Either way, I’ll be there for the one day of the tournament I try to get to every year, looking forward to some good tennis.

Here are the current odds taken from Bet365.com.  The odds will change as the tournament progresses so check out the site for up to date odds.

There are the men with better than a 50/1 chance at winning the tournament according to the oddsmakers.

Like most people I think that Djokovic has a great chance to win this tournament.  But taking him at 10/11 is a little bit steep for me.  He does have a good draw, with a likely match against Berdych in the quarters, which he should easily win, but then it could be Wawrinka (or possibly Raonic) in the semi-finals.  Wawrinka has shown that he can beat Djokovic if he takes him game to that next level, but he’s only been able to do that at a couple Major tournaments.  After Wawrinka would likely be Andy Murray, who also has the ability to beat Djokovic if he plays his best match.  At 10/11 it’s really hard to take Djokovic, even if I think he probably has at least close to a 50% chance of winning this tournament. 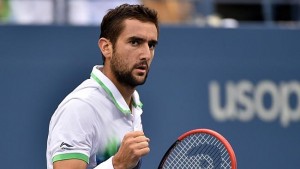 If Cilic can find his form from this time last year, he has the ability to beat the best in the game.

A dark horse that I do somewhat like is Cilic at 33/1.  He has the perfect draw as a 6th seed, to not meet a really big gun until Andy Murray in the quarterfinals.  If Cilic can channel the quality of tennis that won him last years US Open, I think he has a shot here.  He lost a tight match to Cilic last week in Washington, and that was his first tournament back since Wimbledon (where he lost to Djokovic in the quarters).  He’s shown that he can get to that next level, so I think at 33/1 he’s a decent bet here.

Unfortunately out of the men above I would stay away from Raonic.  He does tend to play well at this tournament, but I still don’t see him beating the top players on tour.  He would likely meet Wawrinka in the quarters and Djokovic in the semi’s.  It’s asking a lot of him to win 3 matches in a row against top 5 players, when his record against the top 5 has been so poor.

Berdych is another man I would stay away from.  He just doesn’t have a lot of success against the very top men in the game, but instead is very consistent against those ranked lower than him.

I could see Murray, Nishikori or Wawrinka each winning this tournament, but with Djokovic’s current form it’s hard to take any of them at their current price.

My favourite pick then has to be Cilic at 33/1.  It’s a good return in the hopes that he finds that next level in his game, nearing the US Open when he came into form last year.

Check back on the weekend.  I will try to get some individual match picks up once the semi’s and finals roll around.

You can also bet on all of the various matches at Bet365 (full review).  If you want to learn more about the various bets you can make on tennis, check out our tennis betting section.