It’s a big day in Canadian basketball.  The Toronto Raptors will be trying to advance to the Eastern Conference Finals for the first time in franchise history when they face the Miami Heat in game 6 of their Eastern conference semifinals series tonight. The game will take place at the American Airlines Arena in Miami, and is scheduled to begin at 8 PM. ET.

The Toronto Raps have a 3-2 lead in what has been one of the most exciting series in the playoffs this year. After losing the first game of the series, the Raptors bounced back and won the next two games. The Raptors had a chance to win three straight games but couldn’t stop Dwyane Wade in the final minutes of game 4. With the series tied at 2-2, momentum seemed to have switched back in the Heat’s favor, but the Raptors showed they have a lot of heart and won game 5.

Lowry and DeRozan finally had a good game together, and they’ll need to continue that if they hope to win this game in Miami.

SportsInteraction.com, our top rated sportsbook, has the Heat favoured to win the game by 4 points. The over/under on total points scored is set at 190.  Here’s a full SIA review. 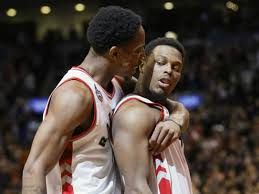 If DeRozan and Lowry can both have another big game the Raptors have a very good chance of winning this series in Miami.

The Miami Heat are trying to return to the Eastern Conference Finals for the first time since LeBron James left the team to return to Cleveland. All season long, the Heat have had their share of doubters, but they kept finding ways to win even when the odds were stacked against them.

In what can only be described as a case of déjà vu, the Miami Heat lost All-Star center Chris Bosh for the second half of the season to the same blood clot illness that forced him to miss the second half of last year. Last year, the Heat couldn’t overcome the absence of Bosh, but this time around, they kept on playing well without their injured star.

In the first round of the playoffs, both teams needed seven games to defeat their opponents. Since they are down 3-2, the Miami Heat would love the opportunity to play in another game 7, but the Toronto Raptors would love to avoid such a scenario if possible.

For most of the playoffs, Toronto’s All-Star backcourt of Kyle Lowry and DeMar DeRozan haven’t shot the ball well. But, both players have found ways to contribute and help the team win. In game 5 both shot the ball better, which isn’t good news for the Heat.

Dwyane Wade has to put the Heat on his shoulder if they are going to win game 6 because the team will be without Hassan Whitehead, who missed game 5 with a knee injury, and Luol Deng, who is scheduled to have an MRI on Thursday after leaving Game 5 in the 3rde quarter with a wrist injury.

Goran Dragic and the rest of Miami’s supporting cast also have to step their game up if Miami wants to force a game 7.

The Miami Heat have a tough task ahead of them with all the injuries they are dealing with.

Unfortunately, I don’t think they have the depth to keep up with the Raptors so I’m picking Toronto to cover the spread and win the game.

The Raps already had to win one game 7 at home this series and it would be great if they can get past Miami without putting the doubt in their minds of another elimination game.