Argentina vs Holland is going to be a very interesting game.  Two of the most effective dribblers in the game in Messi and Robben will try to lead their teams to victory and book their spot in the World Cup Finals.  Argentina was able to get past Belgium with a 1-0 victory after an early 8th minute goal from Gonzalo Higuain.  The Dutch had a bit of a more difficult match, being forced to penalties by Costa Rica after dominating the match for 120 minutes.  The best teams made it through though and now we have the makings of a classic on our hands.

Argentina are small favourites in this match, but the oddsmakers really feel like any of the remaining 4 teams could win the World Cup.

Here are the odds for the match:

To Advance to Finals: 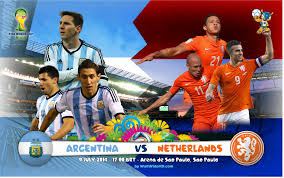 The Netherlands are only small underdogs in this match.  I was expecting the bookies to have Argentina as even bigger favourites, but I think these odds are more accurate and do well to reflect the teams actual chances of making the World Cup Finals.  Based on these odds Argentina has about a 57% chance of advancing, while Holland has a 43% chance to get back in the Finals.

The key to a Dutch victory will be finding a way to get the ball to Robben with space.  He is the best player in the world at attacking defenders with speed from the right side and if the Dutch hope to get on the scoreboard you can expect Robben to play a big part.

On the other end it’s Messi who is the key player.  Angel Di Maria who left the game against Belgium has been ruled out of the semi-final and this could affect the offense of Argentina from the right side.  Holland will have to limit Messi’s space and similar to Argentina’s plan against Robben they will need to get on him quickly when he receives the ball in order to prevent his aggressive runs through the middle of the field.

The Dutch have been playing very strong soccer and even in the Costa Rica game you could still see that they have a great belief in their team.  They have come from behind in 3 of their victories at this World Cup and they have shown the ability to face adversity in crucial matches which is evidenced by the huge last minute comeback against Mexico and the penalty win against Costa Rica.  Luis van Gaal has made the right moves throughout the tournament and at this point I have to bet on the Dutch with them being lead by this genius.  I’m not sure the Dutch will win in regulation, but I do like them to advance.  They were able to continue to play at a high pace in the final minutes of the Costa Rican match and showed calmness on their penalties.