The Eastern Conference Championship between the Impact and Toronto FC had everything you could want in the first leg.  The Impact built a 2-0 lead by half time and added another goal to make it a 3-0 lead and I’m sure Toronto FC fans were having flashbacks to last seasons 1-game playoff with the Impact, which Toronto lost by a score of 3-0.  But before TFC fans could start feeling too sorry for themselves, the big connection of Sebastian Giovinco to Jozy Altidore hooked up for a nice goal and then captain Michael Bradley added another to bring the score to 3-2.

This 3-2 scoreline makes the leg 2 match extremely interesting and according to the oddsmakers it seems like both teams have nearly an equal chance of advancing to the MLS finals.  The two away goals mean that a 1-0 or 2-1 win by TFC will be enough to advance, while the Impact will be hoping for a draw at worst in this game.

To advance to MLS Finals: 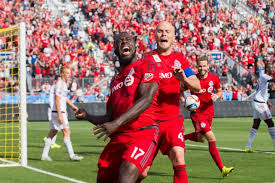 In the first leg the Impact came out of the gate on fire and found some holes in the Toronto FC defensive line with quick counterattacks and seemingly automatic lead balls for their forwards to run onto.  It seemed as the game wore on the TFC defense was able to figure out the Montreal attack and slow it down, mainly by keeping possession and expecting the quick counters when possession was lost.  At home I expect Toronto to have a better game plan to deal with the counterattack of Montreal and also a greater confidence of where they should be on the pitch at all times thanks to playing on a field they are very comfortable on.

Toronto went 8-3-6 at home during the regular season and added another couple home wins in the playoffs thus far with a 3-1 win in an elimination game against the Philadelphia Union and a 2-0 win over New York City FC in their first leg.  They controlled both of these games from the outset and have looked very strong at home in these playoffs.

Toronto will have to avoid another slow start though because Montreal has been great defensively in these playoffs (and TFC may have been lucky with no foul call on Michael Bradley’s goal last game).  The Impact really crowd the box and make it difficult to attack, so if Toronto falls behind in this one it will be a tall order.

That said, I do think TFC has what it takes to get the W in this must win at home.  Sebastian Giovinco and Jozy Altidore have been simply amazing in these playoffs and if they can play at the top of their game it will be extremely difficult for the Impact to keep the ball out of their net in this one.

A draw is definitely a possibility, but I do think TFC will do enough to get the job done at home likely by a couple goals.