The Conference Championship games are still fresh in my memory, but I’m already excited for Super Bowl 50 in a couple of weeks.  I had the Broncos winning the game last week, which was nice to see, but I was completely off taking the Cardinals in the NFC Championship game.  The Panthers just seem like they can run up the score in the first half against any team these days.  It will be a very interesting matchup between that Cam Newton offense and the top defense in the league in the Broncos.

I’m using SportsInteraction.com for betting on the Super Bowl this year (full review).  They have fair odds and a wide variety of fun prop bets to choose from.  Stay tuned for a “how to bet on the Super Bowl” article and a props betting article coming in the next week.  You can see all the NFL articles here.

SportsInteraction.com has also bumped their first deposit bonus up to $200 for the next couple weeks in anticipation of the Super Bowl.  So if you don’t have an account yet you can take advantage of this great offer.  Click here to sign up.

Here is the current spread and totals odds from SportsInteraction.com.  These odds may change throughout the week.

Cam Newton and the Panthers have looked incredibly good over the past two weeks of the playoffs.  They beat the Seahawks 31-24 in the divisional round after going up 31-0 into halftime and followed that up by destroying the Cards 49-15 this past weekend.  Over the two games they’ve outscored their opponents 55-7 in the first halves of those games, so it’s going to be crucial for the Broncos to slow down the Panthers out of the gate in order to stay within striking distance. 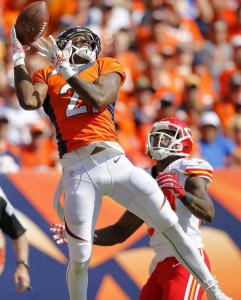 Aqim Talib will once again have to be a force on the field to slow down Cam Newton.

As good as the Panthers have been, for some reason I’m still not sold on this Carolina offense.  Yes, I would agree that Cam Newton is currently the best player in football, but he’s been putting up these numbers with a sub par receiving group.  Greg Olsen is the only bonafide star receiver on the squad and I’m just not convinced that the Panthers are going to be able to move the ball as easily against this Broncos defense that is so good at every position.

Even though the Broncos D could outplay the Panthers offense, I’m not convinced either that Peyton will be able to turn his opportunities into points against a very capable Panthers defense.  I think the game plan will be for Peyton to play it very safe against the Panthers defense that has shown the ability to create turnovers and allow the Broncos defense to decide the game for Denver.

I see the Broncos defense as the best unit in this game, which is why I think the Broncos have a great chance to win a close low scoring battle.  I’ll take the points with the Broncos here and I have no problem also getting on the under.

Stay tuned for more Super Bowl articles over the next couple weeks!