Washington looks to finish out their 3-game set against the Cubs tonight with a W. The Nats have split the first two game of the series with the Cubbies taking the first game 2-1 and dropping last night’s affair 3-2 on a walk-off liner by Addison Russell. This series features some of the leagues best young talent as Washington’s All-Star outfielder, Bryce Harper goes head to head with his childhood teammate, Kris Bryant. Both games thus far have been very low scoring affairs and tonight we see the team’s respective aces take the mound as Max Scherzer duels it out against lefty Jon Lester. Consequently, we would expect the scoring to be much the same as the first two games but I’m feeling a breakthrough outing from the Nationals offense and thus believe the play has to be on the over for their team total. 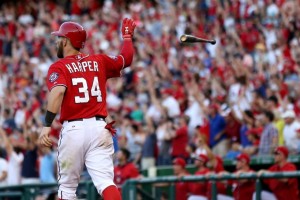 The Nats pose some very threatening bats and speed throughout their entire lineup. It will be interesting to see how Harper matches up against the lefty, Lester, as tonight marks their first meeting. Several Nationals players have had exposure to Lester before and this should pay huge dividends for them tonight. Speedster, Denard Span has hit .267 off Lester in 15 plate appearances. While newcomer, Yunel Escobar, has shown some promise with a .243 average in 37 attempts.  Neither of those numbers will blow you away but the point is that Lester can be hit by this Nationals squad. Washington has a strong supporting cast that has seen some very limited action against the aforementioned Lester. Players such as Tyler Moore have gone 1/3 in their career. While veterans Danny Espinosa and Ian Desmond have gone 2/3 respectively. I feel as though the oddsmakers are giving Lester too much respect against a potent lineup when they offer this team total of 3.5. We have seen time and time again the offensive prowess of this Nationals team throughout this relatively young season. For a team that ranks third in the Majors with 4.70 runs per game I can’t see us passing this over total up at plus money. Ride the Nationals and let’s get it.