The UFC is following up the success of the historic UFC 205 card by continuing to pepper out cards globally.  Last week the UFC was in Northern Ireland and Brazil for two cards on the same day, and this week they continue to build their global brand with a solid Fight Night card in Melbourne, Australia.

This card is built primarily on the main event bout between two up and coming middleweights in Derek Brunson and Australia native Robert Whittaker.  The co-main also features a rising Australian prospect in Jake Matthews, but the remainder of the card is largely filled with local talent that has yet to emerge as true contenders in the UFC.

I will be giving my picks for these two main fights, as well as another fight where I see some great value.  I’m using the best odds I can find for my picks from any of our recommended betting sites. 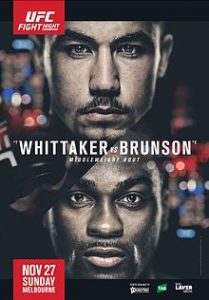 Both of these guys are on 5 fight winning streaks and their most recent wins have been over top notch competitors.  They have each beaten Uriah Hall recently, with Whittaker winning a decision, while Brunson go tthe TKO in the first round.  The first round TKO has become a theme for Brunson, who has beaten his last four opponents (Hall, Carneiro, Alvey and Herman) inside 3 minutes.

Brunson was a 3-time Division II All-American wrestler and he’s now finishing people with pure striking power in the UFC.  That’s a great sign of a future contender when you have a guy with a great wrestling base that has developed his striking to a point where it has become his main weapon.

Whittaker is a very sound fighter who pushes the pace and if he can avoid being knocked or taken down by Brunson then he should win a decision.  That said, I just don’t see him being able to withstand the power shots and relentless wrestling from Brunson for 5 rounds in this one.  We’ve haven’t really seen enough of Brunson lately to know what his cardio is like, but if it’s good enough to maintain power past the first round, I expect him to be able to land the shot (whether a punch or a takedown) and work for the TKO.

Matthews is a 22 year old Australian that the UFC loves as a solid prospect that is easy to market.  He’s coming off a pretty big loss to Kevin Lee, so they’re now giving him a fighter with a good record, but who is not on his level in Holbrook.  I also don’t want to read too much into the Kevin Lee loss because Lee is a very solid prospect in his own right, having just finished Magomed Musafaev last weekend.  Before that loss to Lee, Matthews won a couple fights via finish and had looked very good and dangerous.  His fight against Lee was his first outside of Australia/New Zealand and he may have bit off a bit more than he could chew.  Against Holbrook he will be the far superior athlete and barring a mental mistake he should get the win.

Holbrook is 1-1 in the UFC with a split decision win in his debut and then a KO loss to follow it up.  Before the UFC he was in the Midwest Fight Series and was submitting everyone who faced him, so Matthews will have to be wary of the submission.  That said, Matthews will be the far superior fighter and should win this one the vast majority of the time.

Camozzi has reestablished himself as a decent UFC fighter after getting back into the promotion by taking a short notice fight against Jacare Souza 5 fights ago.  He lost that fight easily, but then rattled off 3 straight wins before losing to Thales Leites via submission this past August.

Dan Kelly has gone relatively under the radar while racking up a solid 4-1 record in the UFC since he joined the promotion in November of 2014.  His lone loss came via TKO against Sam Alvey, who has proven that he has the power to put people away very easily at the lower end of the UFC.  That loss aside though, I’ve been very impressed with Kelly’s durability and also his ability to dictate how a fight goes.  In his most recent fight with Antonio Carlos Junior, Kelly was almost finished early, but came back to win via TKO in the third round.  Previously he fought Steve Montgomery and thoroughly dominated him on the mat for the entire fight.  I really like Kelly fighting in front of his home crowd this weekend.

Camozzi is about as average a fighter as you can find in the UFC.  He has no real strengths or big weapons, but he’s reasonably solid everywhere.  His biggest weakness is likely his takedown defense, which FightMetric.com has at just 63%.  In his most recent loss to Leites, Camozzi was taken down 5 times, passed 7 times and eventually submitted.  Against a former Olympic judoka in Daniel Kelly, I expect this fight to go very similar.  Kelly has a 37% takedown accuracy and he should easily be able to use his judo to take this fight to the mat, where he will be able to dominate Camozzi.

This is an absolutely great place to bet the underdog.