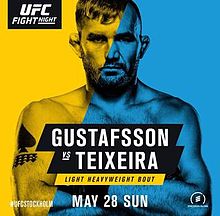 I always enjoy watching some live UFC with my Sunday morning breakfast, and that’s what us here in Canada will be treated to this weekend.  The UFC is back this weekend with a Fight Night card out of Stockholm, Sweden.  The card gets underway at 10am EST with a couple early prelims on UFC Fight Pass and then the fights move to the Fight Network at 11am before the main card gets underway at 1pm EST with 6 fights being shown on TSN 5.

This card has a lot of implications on the light heavyweight division with top contender Alexander Gustafsson taking on #2 contender Glover Texieira, and #5 and #7 ranked fighters Volkan Oezdemir and Misha Cirkunov being featured in the co-main.  I’ll give my picks for both of these fights below, as well as one other pick that I really like that is also on the main card.

Gustafsson is 2-3 in his last 5 outings inside the Octagon, but he really only had the one bad loss where he was TKO’d by Anthony Johnson in Stockholm.  His recent loss to current champ Daniel Cormier was a split decision that could have gone either way and his previous loss to Jon Jones was one of the best fights of all time and many people thought he won it.  Gustafsson gets a chance to redeem himself in Stockholm with this fight and if he can avoid Glover’s power he should be the superior fighter in this one.

I expect Gustafsson to be able to maintain distance against Glover and land several solid shots throughout this fight.  Gustafsson used an in and out game plan fairly successfully against Daniel Cormier and his athleticism and ability to be light on his feet should allow him to control the octagon in this fight.

If this goes to a decision, Gustafsson will win.  A finish will more likely go to Teixeira (that said Gustafsson could also get the TKO).  I think this fight goes 5 rounds and Gustafsson has his way with Glover.

Oezdemir is the #5 ranked light heavyweight, but he’s a huge underdog against #7 ranked Canadian Misha Cirkunov and rightfully so.  Oezdemir pulled out a split decision in his last fight against an uninspired Ovince Saint Preux, but that’s the only big win of his career, and like I said, OSP did not look at his best.

Cirkunov is the real deal.  He absolutely destroyed Nikita Krylov, who was another big time prospect in the UFC when the fight happened, manhandling Krylov en route to a submission victory in the first round.  Cirkunov also looked solid against both Cutelaba and Nicholson in his recent two UFC fights.

If this fight goes to the mat, Cirkunov has the ability to finish, while Oezdemir is more likely just looking to control position.  On the feet, I also give the edge to Cirkunov, whose boxing has improved significantly in his last few fights.

I could see Cirkunov as a future UFC champ, while Oezdemir is getting too much credit for a win over an overrated Ovince Saint Preux.

My other pick on this card is going to be Jack Hermansson.  He’s fighting at home in Sweden and although he lost his last fight via submission to Cezar Ferreira, he impressed in his UFC debut with a decision win over Scott Askham who is no pushover.

Alex Nicholson is a dangerous fighter who does have knockout ability, but if you watch him fight he really isn’t a very athletic guy and he has big holes in his defense.  Add in the fact that Hermansson has never been knocked out and Nicholson has not shown any type of submission game that could endanger Hermansson.

Nicholson is the type of guy who throws some strange fights looking to finish, but once enough tape comes out on him I think he will be easily figured out by the more technical strikers in the division.

Those are my 3 plays for the card.  If I add anymore after further research I’ll do so on Twitter.  Follow me there!