It seems like ages ago since we saw Michael Bisping retain the Middleweight belt in a very difficult fight with ageing legend Dan Henderson.  It’s been three long weeks without any UFC action, which is almost unheard of in this day and age of the UFC.  This weekend the action is back and we’re treated to a really solid Fight Night card out of Mexico City, that should get everyone’s eyes back on the UFC and help to really promote next week’s monumental event in New York City.

***Contest Alert*** Speaking of UFC 205, I’m going to be running another pick’em contest for that event, just like I did for UFC 200 and UFC 202.  The contest information post can be found here.  Join up and get your picks in now for some great prizes.

Alright, onto this weekends card.  I’ll be giving my picks for some of the top fights from the card below.  I’m using the best odds I can find for my picks from any of our top rated sportsbooks. 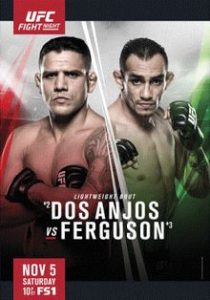 Tony Ferguson is on an 8 fight winning streak in the Lightweight Division, taking out big names such as Abel Trujillo, Gleison Tibau and Edson Barboza, all via submission finishes on this streak.  He’s one of the most exciting fighters in the UFC that has not been given a title shot.  If he wins this fight with Dos Anjosit will be 9 in a row, and I wouldn’t be surprised if Ferguson is once again passed over for the title shot.

I’m picking Ferguson in this fight with Dos Anjos.  I do think Dos Anjos is far better than Eddie Alvarez, but that fight showed he is susceptible to a big shot and it will be interesting to see how he bounces back after being knocked around like that, which has not been the norm for the Brazilian.  Dos Anjos looked like an absolute beast in his title run, especially in his dominant win over Anthony Pettis, but I do have concerns that Ferguson’s unique footwork and strikes could be a lot for Dos Anjos to handle.

I think it’s Tony Ferguson’s time at the top and he will show that with an impressive victory over Rafael Dos Anjos this Saturday.

Diego Sanchez is far past his prime in the UFC.  He still seems to get wins every other fight, but they are always grueling decision wins.  It’s hard to stay relevant in the UFC without having any real finishing ability, and it also takes a toll on your body when you go into a war each time you’re in the octagon.  I think the quick TKO by Joe Lauzon in his last fight could be the beginning of the end for Sanchez’s MMA career.

Marcin Held is also no joke.  He’s a guy coming over from Bellator after going 11-2 in his most recent stint with the #2 promotion.  He’s 7-1 in his last 8 with the only loss coming in a Bellator title shot against Will Brooks, who is now making a name for himself in the UFC.  Held, who is only 24 after getting his MMA career started early should have no trouble getting his first win in the UFC over aging fan favourite Diego Sanchez.

Ricardo Lamas is the ultimate gate keeper in the Featherweight Division of the UFC.  Yes, he’s 3-3 in his last 6 fights, but those losses have been to the big names of the division in Jose Aldo, Chad Mendes and Max Holloway.  Lamas often gets overlooked, but he’s the #4 ranked fighter in the division for a reason and I don’t expect many fighters below him to be able to leap frog him up to the top.

This includes Charles Oliveria who is only 1-2 in his last 3 fights.  He’s also been fighting against top guys with his losses to Max Holloway and Anthony Pettis, but I just don’t think he has the toughness to hang with Lamas this weekend.

I expect people to once again see an impressive fight from Lamas and him to show everyone why he’s so far up the rankings of the Featherweight Division.

This is a very intruiging fight between two guys who need to be in the conversation in the Lightweight Division.  Dariush is 6-1 in his last 7 fights with wins over Michael Johnson, Jim Miller and James Vick.  His only loss was when he was caught by Michael Chiesa in a rear-naked choke.

Magomedov may have an even better resume of late winning 4 straight fights since joining the UFC including a very impressive win over Gilbert Burns a year ago.

That said, I’m leaning towards Dariush in this fight.  He’s had more run in’s with top UFC fighters and he has more weapons than Magomedov.  If he can avoid the takedown he should be able to land some big strikes and either finish Magomedov on the feet or find an opening to sink in a submission.