“Slugfest”, a word we’ve come accustomed to hearing from the analysts and sportscasters when reviewing a Jays game the morning after. Appealing to the eyes of all fans who love the moonshot home runs and bases-clearing doubles. This action can also be music to the ears of a certain type of bettor. This bettor foregoes their love of a specific team in favor of a line that just appears to be too profitable. Banking solely on the prospect of a pitching duel or the aforementioned slugfest. This, would be your “totals” bettor. 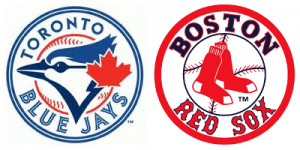 Even a novice baseball eye will pick up on the situation we are handed here in this game where two powerful lineups are presented to two struggling pitchers in a hitter-friendly ballpark. This just screams at me to bet the over and below I’ll dig into why you should too.

Toronto has proven themselves to be one of the best bets to cover an over regardless of who their opponent may be. With the insane amount of pop the Jays have throughout their lineup in the forms of rookie sensation Devon Travis, Jose Bautista, Josh Donaldson, Edwin Encarnacion & Russell Martin, shutting this lineup down is no easy task. Missing from today’s game will be starting shortstop and leadoff man Jose Reyes whose been placed on the 15-day DL with a cracked rib.

Boston comes in with a healthy lineup whose only blip is the absence of power-hitting first baseman, Mike Napoli who’s out due to illness and won’t be ready to go for another couple days. Dynamic outfielder Jackie Bradley Jr. has been called up to fill Napoli’s void in the lineup while Daniel Nava and former Cardinals’ stud, Allen Craig will likely split first base duties.

Gracing the mound for their respective clubs will be kncukleballer, R.A. Dickey and former Tiger, Rick Porcello. Both pitchers come in struggling having been knocked around for a combined 11 runs in their last start(s). Dickey’s knuckleball was tattooed for 7 earned runs on 9 hits in 4 2/3 innings in his last start against the Rays. Porcello, the man who inked a 4-year $82.5 million contract extension before the start of the season fared a little better allowing 4 runs over 6 frames in a no decision against Baltimore.

Both teams have combined for 46 hits and 30 runs through the first two games of this 3 game series. Those numbers are insane. Blue Jays batters are hitting a combined .315 average on Porcello over the past two seasons and Red Sox batters are posting a .267 clip off of Dickey, we’re looking good to hit this over tonight.

If you’re interested in more trends you can see them here.