The Texas Rangers return home tonight fresh off the heals of a successful nine game road trip in which they dominated their opponents with a 7-2 record and outscored them by a combined 55-45. What’s more impressive is that if we exclude last night’s 12-3 shellacking at the hands of the Indians, the Rangers were +19 in run differential on that road trip. Huge numbers. Tonight they kick of a four game set against the struggling Boston Red Sox. Boston comes into Arlington tonight as losers of three straight games.

Nick Martinez will toe the slab for the hometown Rangers tonight. Martinez has been nothing but impressive so far this year. He holds a 4-0 record to go along with a WHIP of just 1.22 through fifty-five innings pitched. He’s allowed a measly 17 runs (12 earned) which results in a dazzling ERA of just 1.96. His counterpart on the mound tonight will be Boston’s young left hander, Eduardo Rodriguez. The 22 year old will be making his first Major League start tonight and he could be in tough against a Texas offense that has been producing at will. Rodriguez has pitched well this season in AAA Pawtucket as is evidence by his call up but I believe his inexperience and the Rangers’ hot bats are reason enough for us to feel confident in this over. 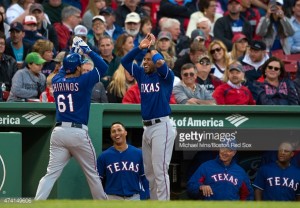 Texas hasn’t been nearly as strong at home as they have been on the road this year. They possess a home record of just 6-13 versus a road record of 23-24. Although their record at home is rather shabby, they have still managed to hang some good numbers on the scoreboard. This is part of the reason I feel confident in the team total bet tonight rather than betting them straight up. The Rangers come into tonight’s game averaging 4.21 runs per game at home versus 4.75 on the road. They’ve produced a solid batting average of .253 at home against a .240 away mark. The real edge tonight lies within their productivity against left handers. In 33 games this year against left handed pitching, the Rangers have managed an average of .256, a slugging percentage of .456 and an on-base-plus-slugging percentage of .790. These are phenomenal numbers for a team against lefty pitching. With all this evidence in front of our eyes, I feel as though we have to place a wager on the Rangers over 4 tonight. Let’s get it.