Switzerland and Ecuador kick things off in Group E at noon on Sunday.  This is a huge game for both teams because France is also in this group and one of these three teams will not qualify for the knockout stage.  Each nation is expected to perform well against Honduras, which leaves the games amongst the Swiss, Ecuador and France as huge games to determine the outcome of this group!

Here are the 3-way odds for the game.  If you’re looking for other lines to bet on for this game I suggest checking out Bet365.com.  They have 131 different bets you can make on every World Cup group match!

This is close to as tight of a game as you will see, but Switzerland are small favourites in this one. 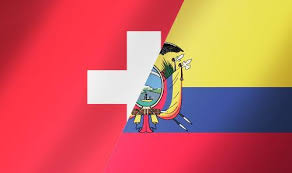 I like Ecuador to win this game.  They are close to home being from South America and were able to qualify for the World Cup out of a very difficult South American group.  They had wins over Chile and Uruguay in the qualifying and have followed that up with some decent showings against top teams such as Netherlands and England in their tune-up matches for the World Cup.  Ecuador has shown throughout their past several matches that they have the ability to score goals so I expect them to find the back of the net at least once in this game against Switzerland.

The Swiss qualified from a very easy group where Iceland actually finished second, which shows how weak their qualifying group was.  Since qualifying they’ve been content with playing sub par competition such as Peru and Jamaica who they beat in their two tune-up games in Switzerland.  This Swiss team is being drastically overestimated and they are in no way worthy of their 6th place in the FIFA World Rankings.

Ecuador is the smart play here and this is one of my favourite plays so far in the World Cup.