St. Louis looks to continue their dominant form tonight as they stroll back to hitter friendly, Progressive Field to face the Indians in game two of their three game set. The Cardinals took the opening game of the series in powerful fashion last night posting 8 runs on 13 hits throughout the game. Tonight, the Cards line up against the reigning AL Cy Young award winner in Corey Kluber. Kluber is off to a horrid start this year as he brings along an 0-5 record and dreadful 5.04 ERA. 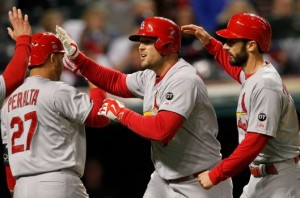 St. Louis is being offered a team total of flat 3 tonight. This is one of the juiciest lines we will see on this team all year long. It comes to me as a major surprise even with Kluber on the mound that this Cardinals team is being offered such a low team total at such a favorable price. St. Louis has a Major League best record of 23-9 on the year. Of those 32 games, the Cards have managed to score 3 or more runs 26 times.

Highlighting Kluber’s struggles this season is a pretty simple task. The man who allowed only 64 runs in 235.2 innings last year has already given up 25 runs in just 44.2 innings so far this year. History is also not on Kluber’s side as he is just 2-5 in career team starts throughout the month of May.

St. Louis’ bats have been hot of late as well. Four of the Cardinals top, everyday players have combined to hit .364 over the last 7 days (Molina, Heyward, Bourjos & Holliday). Couple this with the fact that Progressive Field in Cleveland has statistically been the second most hitter-friendly park in all of Major League Baseball this year and we have the perfect mix to hit this over. I suggest getting this one in ASAP as the odd is steadily dropping as it should.