The Dutch and Costa Rica both advanced to this quarterfinal match in stunningly dramatic fashion.  The Dutch were down with 5 minutes remaining in their match with Mexico before drawing even on a blast from Wesley Sneijder in the 88th minute.  Then just four minutes later Arjen Robben, who was dangerous all match long, drew a penalty in the box and Klass Jan-Huntelaar drove the ball home to put Holland into the quarterfinals.  Costa Rica on the other hand were up 1-0 early in the second half, but a 66th minute red card put them down to 10 men.  Greece finally capitalized in injury team and sent the game into extra time.  It looked like an extra 30 minutes would give Greece the time to score another goal with their extra player, but Costa Rica dug in and ended up winning the game on penalties.

Here are the odds for this match.  I’ve included both the 3-way odds and the odds to advance to the semi-finals. 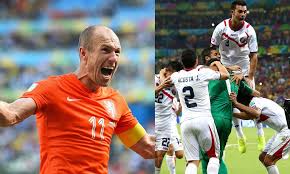 For full disclosure I should state that I’m a Dutch fan.  I do think Holland will be able to find a way to beat Costa Rica in this match.  Holland has such a potent offense lead by Arjen Robben and Robin van Persie that if they control the play we will surely see a couple Holland goals in this game.  When you add in Wesley Sneijder and Memphis Depay or Klass Jan-Huntelaar off the bench you have to expect the Dutch to score in regulation.

Costa Rica has found ways to score against strong opponents in both Uruguay and Italy, so I do worry about their attack, but I think Holland will be able to score enough going the other way to still win even if Costa Rica breaks through and gets a goal.  It’s rare for the Dutch to go a full game with a cleansheet, but they have now scored 12 goals in 4 matches, which shows just how potent this offense is.

I also have full trust in Louis van Gaal who seems to have a great understanding of his players, when to change formations and what to expect from his opponents.  I’m sure that the Dutch have studied Costa Rica very well over the past week and this time to investigate a relatively unknown team will do the Dutch well.

Look for Robben to be in the thick of things and to generate enough chances for Holland to go through.