Milos Raonic is the biggest name in Canadian tennis and you will notice that here at Sports Betting Canadian I will be following him quite a bit, along with the top players in the game and the other Canadians such as Eugenie Bouchard, Vasek Pospisil and Peter Polansky.

This week Milos is in Monte Carlo to play in the Monte-Carlo Masters, which will be the first big tournament of the clay court season and Raonic’s first clay tournament of the year as well.  Milos has done well so far this season posting an 8-3 record in 3 tournaments, but he has steered clear of the smaller tournaments to this point in the year only playing in the Australian Open and then two Masters 1000 events.  This strategy could help him get to the next level at some of these bigger events while also staying injury free, which has been hard for Milos over the past couple years.  That said, winning an ATP 250 or ATP 500 tournament here and there really does help your point totals and Milos has done these things over the past couple of years. 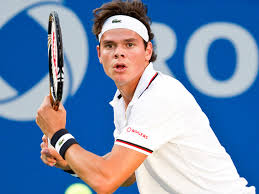 Milos got a bye through the first round and is the 8th seed in the tournament.  He now plays Yen-Hsun Lu of Chinese Taipei who beat a strong clay court player in Federico Delbonis in the first round.  Lu has been very active this year and has an 11-7 record after playing in 7 tournaments thus far.  He has some big wins this year like defeating David Ferrer in the semi-finals of an ATP 250 event and destroying Kohlschreiber at Indian Wells at the beginning of March.  Lu is currently ranked #52 and having got a clay court match already under his belt he may be a difficult opponent for Raonic.

I personally am going to be staying away from this match.  I think Raonic will win, but Lu’s form of late, combined with this being Raonic’s first match on clay have me leaning away from putting any money down on Milos in this match.

The oddsmakers aren’t giving Raonic a great shot at winning this tournament either, likely due to his less than stellar performances on clay in his career.  Here are the odds for the tournament winner from Bodog. Remember these are from Tuesday evening, so you should visit Bodog.eu for up to date odds at any time.

As you can see even though he’s an 8 seed, Raonic is the 14th favourite in the tournament according to the bookies.  Looking at the draw though he has a relatively decent road.  If he gets past Lu, it’s either Robredo who hasn’t been playing that well or Benneteau.  Then if he wins that match Wawrinka is the likely opponent and since the Aussie Open, Wawrinka has once again just looked like a player on the verge of the top 5, not a top 3 like he is being treated.  Raonic has a shot at going fairly deep, if he can figure out the clay court game quickly.