In the second match in the all-South American quarter of the knockout stage at the World Cup Colombia will play Uruguay.  Colombia cruised to an easy 9 points in Group C, while Uruguay took a much different route to the knockout stages after losing their first game and needing two big wins to achieve second place in Group D.  These two rivals will now battle it out on Saturday in a match that could determine Brazil’s opponent for the quarterfinals.

Here are the odds for the match from top sportsbooks for Canadian bettors.  I’ve included both the full time result and team to advance odds below:

After a very solid group stage Colombia is the favourite to come out of this match up. 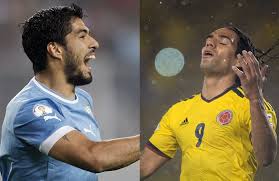 Colombia cruised through their group with 3 wins and +7 goal differential.  That said Colombia was in a very easy group with Greece, Ivory Coast and Japan.  Uruguay will definitely be the biggest test that Colombia have faced so far.

Uruguay lost their first match to Costa Rica and it looked like that could spell the end of their tournament because up next were England and Italy.  Lucky for Uruguay though Costa Rica is no joke finishing atop the group, which allowed Uruguay’s two wins over Italy and England to be enough for them to qualify.

In South American qualifying Colombia finished second to Argentina, while Uruguay just squeaked in to the World Cup in the last qualifying spot.  In their two matches in qualifying the two teams split decisions, with each team winning at home.

FIFA has released a statement that Luis Suarez has been banned for 9 matches, which is a huge blow to Uruguay.  They lost the game that he didn’t play in this tournament, while winning the two he was in.  Because he will not be in the lineup against Colombia, Uruguay’s chances plummet.

Even if Suarez was playing, Colombia would have still had the better chance to progress, but without Suarez they are by far the superior team.

My Play: Colombia 2.10 to win in regulation

Tagged With : Colombia • Round of 16 • Uruguay • World Cup betting