Friday’s game in Arlington features an underrated Rangers team against a flat lined Indians squad.  We have a battle of veteran left-handers on the mound as Wandy Rodriguez looks to improve on his stellar stretch of outings for the hometown Rangers, while the Indians turn to a struggling depth pitcher in Bruce Chen. Both pitchers lack the velocity that we expect to see in the MLB but their command is certainly what has carried them through such lengthy careers. Texas’ bats have been hot of late and the Indians haven’t really impressed all year long. 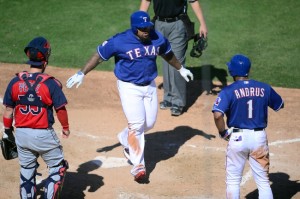 Wandy Rodriguez has been in fine form of late. The Dominican native has puzzled batters as is evidence by his franchise record run of 34 straight batters retired between his last two starts. He’s been tagged for only two runs on five hits over those 14 near perfect innings. Wandy is not the type of pitcher that is going to overpower batters as his fastball tops out at 88 mph but the veteran lefty certainly knows how to hit his spots to induce weak grounders and fly balls. Wandy carries a very respectable ERA of 2.70 and a gorgeous WHIP of 1.07 into tonight’s action. Adding to his lure is the fact that he has never pitched against this Cleveland lineup. I personally see this as a huge advantage to him as most hitters will not know what to expect. Sure, they can scour hours of film and you can be certain that there is lots available as Rodriguez is in his 11th MLB season, but nothing can prepare a hitter for live, in-game action.

The Rangers have been hitting well of late as they have averaged 5 runs over their last nine games. Outfielder, Shin-Soo Choo, has been swinging a dangerous stick recently as he rides an American League-best 14 game hitting streak into tonight’s game. He produced 3 hits in a losing effort to the Royals last night. Another Texas bat to watch is that of Prince Fielder. The big man has, in a sense, lacked his customary power by banging out only 4 homers but he is still making the most of his plate appearances as he has hit .348 on the year.

Indians starter Bruce Chen, who was picked up as a depth pitcher this off season was roughed up in his first start. He allowed six runs on 10 hits and a walk over just four innings last Saturday against the Minnesota Twins. However, the Indians are in desperation mode and are trying to preserve their rotation since T.J. House went down with a shoulder injury so Chen gets the call again tonight.

I feel as though the Rangers have a better matchup on their hands tonight. They have made immense strides of improvement over the past two weeks in an effort to climb out of the dust in the AL West. Put your faith in the Southern Sluggers and enjoy the game.