The Stanley Cup Finals gets underway in Tampa Bay tomorrow.  Both of the Lightning and Blackhawks had to earn their place in the Finals with game 7 victories over the top regular season teams in each respective Conference.

The Blackhawks are trying to win their 3rd Stanley Cup in a 6 year span, which would no doubt put them in the “dynasty” conversation in this new salary cap era of the NHL where parity is stressed and it becomes extremely difficult to hold on to your players after finding success.

The Lightning though are trying to start their own dynasty.  Being the youngest team in the league there are many more years available for this team to win, but they want to get started right now.

Here are the odds from our top rated sportsbooks for Canadian bettors.

The Blackhawks are the favourites in this series despite not having home ice advantage.  This has to be because of their Stanley Cup experience and also the fact that their stars, Toews & Kane, simply know how to show up when the moment is the biggest. 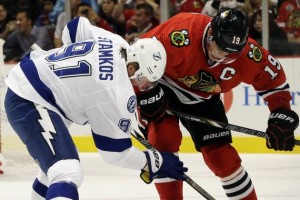 I actually like the Lightning in this series.  They are a very fast team that has a lot of offensive weapons.  They will be able to make Keith, Seabrook and company work on the backend and there is no doubt that they will be able to get the Stamkos or Johnson lines out against the bottom two defensemen, which is where the Blackhawks lack depth this season.

The Lightning’s depth on defense is apparent and they will be content having just about any pair (minus Nesterov) against the top guns of the Blackhawks.  Stralman and Hedman will only have to come close to matching the level of Keith & Seabrook for the Lightning to get the nod at the back end.

I think the only areas where Chicago is really superior in this series are in their experience and their clutch performers.  And in the Stanley Cup Finals there will be a lot of clutch moments, so by no means am I counting out Chicago.

Ben Bishop hasn’t gotten much fanfare this playoffs because he’s been in for some huge goal totals against (three 5 goal games against in the Rangers series), but he also has 3 shutouts in these playoffs including 2 in the 2 game 7 situations the Lightning have found themselves in.  If that’s not clutch goaltending then I don’t know what is.

Corey Crawford has the experience and he’s also played well, but I don’t give an advantage in goal to either team.

This series is extremely close in my view.  The Blackhawks experience may be enough to tilt the series in their favour, but the Lightning have shown they too have a lot of resiliency with their two game 7 wins and taking out the top two teams in the East.  Just based on the odds I like the Lightning in this series.