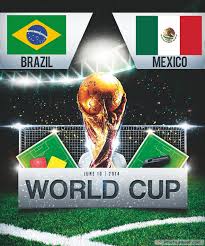 Brazil and Mexico each won their opening games of the World Cup, as was expected.  The Brazilians were able to defeat a strong Croatian team 3-1 in the tournament opening match, while Mexico was able to hold on for a 1-0 victory over Cameroon.  In my opinion the Brazilians didn’t look as good as the scoreline indicates in the Croatian game.  Neymar was somewhat lucky that the shot for his first goal found the inside of the post because it wasn’t struck particularly well and the goalkeeper could have done a better job on it.  The foul inside the box to draw the penalty for the second Neymar goal was a very weak call by the official and then Neymar’s shot wasn’t the best from the spot with the goalkeeper getting a decent piece, but not enough to keep the ball out of the net.  The Croatians then fought back and scored a goal of their own before controlling the play in the last few minutes and actually equalizing with a goal that was disallowed because of a questionable foul on Julio Cesar.  Overall Oscar was by far the best player on the pitch and he was really the only Brazilian player I was particularly impressed with.  Neymar scored two goals, but the offense seemed to often end with him trying to do too much, but that could be nerves.

In this next match against Mexico I’m interested to see how strong Brazil is.  Mexico will be a decent challenge I think.  They looked fairly good against Cameroon, but obviously Brazil is an entirely different animal.

Here are the best odds for the three-way betting.  To see some more props check out Bet365.com.  They have 116 lines for each World Cup match!

I wasn’t impressed with Brazil in their first game against Croatia.  The Brazil team was lucky on many occasions from referee errors and I think this played a role in them winning 3-1.  I think that game against Croatia really could have finished in a draw and for this reason I like the odds of 6.26 for a draw against a decent Mexican team.  Mexico has not been giving up many goals in their tune up games in the United States and I expect them to be able to keep the Brazilians chances to a minimum.

Fred, who was the Brazilians leading scorer at last years Confederation Cup, was near invisible against the Croatians and Hulk may not play in this match due to an injury, so the offense will likely once again fall to Neymar and Oscar, who the Mexicans may decide to focus on based on their performances against Croatia.

I don’t think the Mexicans win the game because even if they do get an early goal I think the Brazilians do have the class to find a way to level the match, but based on what I saw from the Brazil side in the first game I don’t like them to win with odds of 1.30.

I’m taking a Brazil and Mexico draw with odds of 6.26 from SportsInteraction.com.