Curling is an event where Team Canada has a great chance to bring home up to 3 gold medals at the 2018 Winter Olympics.  Team Homan is a big favourite in the women’s event, while Team Koe will likely be battling with Sweden in the finals for a gold medal in the Men’s event.  Both the Men’s and Women’s curling events take place between the 13th and 25th of February, while the new mixed doubles event kicks off the Olympics taking place between the 8th and 13th.

The Canadian curling teams are widely celebrated here in Canada, so there will be a lot of television coverage of their tournaments and a lot of pressure on each team to bring home gold for Canada.

Below I’ve included the pre-tournament odds for both the Men’s and Women’s events.  I’ve taken the odds from our top rated betting site, Sports Interaction.

You will also be able to bet on each individual game at Sports Interaction.  Select ‘Winter Olympic’s and ‘Curling’ on the sportsbook page to find all of the odds.

Here are the odds for the Men’s Curling tournament at the 2018 Olympics from SportsInteraction.com: 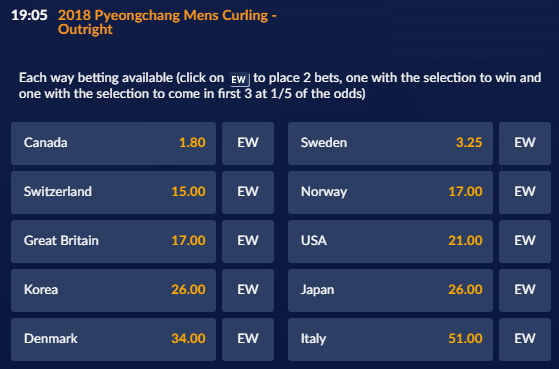 The Canadian Men have won gold at the last 3 Winter Olympic Games, so it’s no wonder they are once again the favourites this year.  It’s generally thought that the Canadian qualifying tournament has stiffer competition than the Olympics, so the team that qualifies from Canada is expected to bring home gold.  This year that honour and responsibility falls to Kevin Koe and his team from The Glencoe Club in Calgary.  If they can take down gold they will be the fourth different team to represent Canada and bring home gold over the past four Olympics, with Canadian curling legends Brad Gushue, Kevin Martin and Brad Jacobs winning as skips over the past 3 Olympics.

The biggest threat for Canada comes in the form of team Sweden, who are the same team skipped by Niklas Edin that finished second to Canada’s Brad Gushue at the 2017 World Championships.  Edin’s team has become a staple of curling in Europe having won the European Championships for the past 4 years and winning the World’s in both 2015 and 2013.  The fact that there is far less competition to Edin’s team in Sweden has allowed them to gain a lot more international experience than Kevin Koe’s team that has to qualify through the tough Canadian tournaments to gain international experience.  That said, the stiff competition of the Canadian qualifiers should actually give Koe an advantage because they can never take a game off.

I like Kevin Koe and his team to continue the streak and bring another gold back for Canada.

***I also think that taking either Canada or Sweden with the each-way bet is a good play as well.  The two teams are by far the best two in the tournament and for either one to not finish at least 3rd would be a major shock. 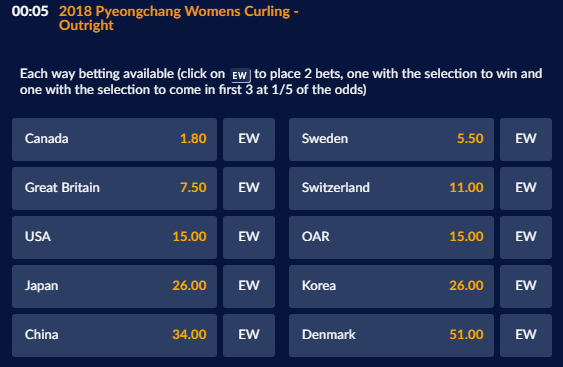 Rachel Homan and her Ottawa team will finally get a chance to play for an Olympic Gold Medal.  After being the consensus number 1 team in Canada for the past half decade, Homan’s rink had a flawless 2017, which included qualifying for the Olympics in front of a home crowd in Ottawa.  They actually had to defeat Jennifer Jones, who won the gold at the 2014 Olympics in the semi-finals before booking their spot at the Olympics with a hard fought win over Chelsea Carey in the finals.

Just like with the Men, the Canadian tournaments generally have stiffer competition than the International events.  That said, Team Homan had failed to win the World Curling Championships after winning the Canadian Scotties Tournament of Hearts in both 2013 and 2014.  This is why it was so crucial and impressive for Team Homan to get the monkey off their backs with a big gold medal win at the 2017 World Curling Championships after winning the Scotties this past year.

So, like I mentioned above, 2017 was a flawless year for Team Homan.  They won the Scotties, the World Curling Championships and qualified for the Olympics.  It’s very difficult to go 3 for 3 in big tournaments in curling, which shows their level at this point in time.

At the 2017 World Championships Team Homan went 11-0 in the round robin and followed that up with two decisive wins over Russia in the semis and finals to claim a decisive victory.  That Russian team that made the finals at the World Championships will not be in attendance at the Olympics, instead replaced by another team from Russia.  That said, the Russians, as well as the Swedish team skipped by Anna Hasselborg and the Great Britain team skipped by Eve Muirhead will be the biggest threats to Team Homan in South Korea.

There is also a mixed doubles event this year.  Team Canada is also favoured in that event at odds of 2.00 with Kaitlyn Lawes and John Morris looking to bring home another gold for Canada.

Click here to visit SportsInteraction.com to bet on either curling competition at the Olympics.  Or check out our 3 step guide to betting on the Olympics online for Canadians.